Hi, I’ve read a few posts and a Garadget that I’ve had appears to be registering low reflectance. The other one is up around the 90s this is around the 15-50. I tried replacing the reflective sticker but no difference.

I notice that there used to be a reflection of the laser at the other end of the garage but not now.

I’ve read that it may be laser that needs replacing and wondering how to go about that.

Not Laser and M button does seen to work
Reflection value
Dim laser false alarms
I am getting bunch of notifications for no reason
garadget February 9, 2017, 3:59am #2

If the laser is the issue, the process is rather simple if you have any previous experience with the soldering iron. Lasers are cheap, you can get 10 of them for under $2 from Asia or under $5 if shipped from US.

Let me know if you feed like trying the process and I’ll write up the best way from my experience. If not, you can send your unit back and I’ll do the repairs.

I’m happy to try, I assume there is a warranty on these things but it would cost me more to ship to you than to buy the lasers.
If you could let me know the best way that would be great and also part numbers.
I have a solder sucker and solder wick.
Thanks Josh

Yes, I warranty all items for a year. From your responses it sounds like you will have no difficulty with this particular fix.

Here are the process:

The laser is 6mm 650nm 5V 5mW. There are many listings on eBay and it is worth to get few spares because they’re so cheap. The only thing to look for is the leads poliarity. Here’s a closeup of the correct type: 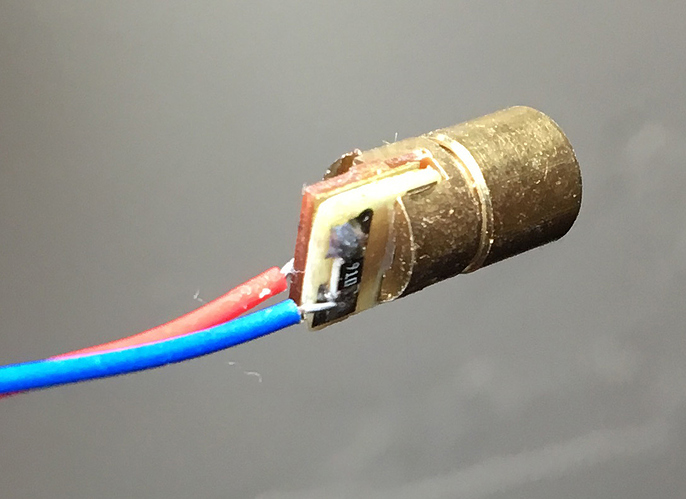 Edit: video shows that PCB on the laser is trimmed with the xacto knife to fit into the spacer. Most of the units now have a spacer with the cutout that accommodates uneven the PCB so the trimming is no longer needed.

Thanks, I’ve ordered some, just have to wait a month for them to come from the China ship!

I had a similar issue and swapping the laser took a whole 3 minutes. Easiest thing to do and i have 9 spare lasers and all my friends have garadgets so ill happily fix theirs for them if they ever have any issues.

Hopefully more fixes are not going to be necessary.
Though happy to hear that Garadget is popular in your neighborhood.

It is actually really popular. I have also shown my neighbours and they think it’s brilliant. Its pretty common for my neighbours to drive off in the morning with the garage still open!! I convinced 3 of my friends to purchase together to save on shipping. They are really happy with theirs.

I think more marketing is required for your product. Its excellent - just a lot people are not aware of it.

Anyone who reads this in future, I finally did the replacement, very easy and no solder wick/sucker was needed.
If you can hold a pen you can do this.
Josh

@garadget I’ve replaced the laser and it starts off around the 80-90% but then drops straight away to 25%. I’ve tried two lasers, and I’ve had to lower the threshold.
The other garadget operating the door right next to it sits around 96%.

Any other suggestions?
Thanks Josh

What is the time between it starts out high and drops to 25%? Are we talking hours, days, weeks?

The first lasting I checked straight away after installing was fine but the next day was down to the 20s.
The second laser, I watched a bit more and it was probably a few seconds and it dropped to 30 but then bounced to 60 and stayed there for about 30 seconds before I left it.
I didn’t really wait longer than that but I would assume it’s dropping pretty quick.
Thanks Josh

Josh,
It is improbable for multiple lasers to fail in this manner. Do you notice a significant drop in laser’s brightness at the time you’re getting lower reflection rage? There may be some other factor at play (e.g. the lamp near by washing out the laser’s reflection etc).

You can try holding a reflector in the path of the laser at different angles and distances to see when the change occurs.

Thanks for the tip, I tested moving a reflector pad around and it did make a difference. There was no other light source (it’s night time right now)
The reflector was about 10cm lower than the one on the other door so I moved it up and it all seems good so far, up above the 90% again.
Didn’t even think that would be a possible cause of the issue as the old laser that was working was pointing at the same spot!

Thanks for the quick help. Josh